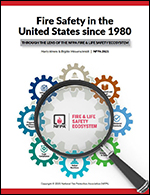 June 10, 2021 – Much has changed in the nearly five decades since the America Burning report was issued in 1973 and revisited in 1980. The number of fires and fire deaths in the United States has reduced dramatically and that progress has unfortunately led to fire safety taking a back seat to other societal concerns that seem more pressing. To understand the headway that has been made and the challenges that remain, the National Fire Protection Association (NFPA) commissioned the Fire Protection Research Foundation, the association’s affiliate, to examine the current state of fire safety in the United States. The new seminal report, Fire in the United States Since 1980, Through the Lens of the NFPA Fire & Life Safety Ecosystem, is expected research to be a key document with valuable insights that will help to advance fire and life safety.

While the report references success in several occupancies such as hospitals, nursing homes, schools, and hotels, the main focus that emerged from the study is residential fires. Homes have consistently accounted for the largest share of reported structure fires and most of the civilian fire deaths and injuries. And although there have been fewer fires in the U.S. than in past decades, statistically, if a home fire is reported, occupants are more likely to die today than 40 years ago. In fact, research shows that:

The 63-page Fire in the United States Since 1980, Through the Lens of the NFPA Fire & Life Safety Ecosystem report shows, in part, that:

The new study analyzed fire data and other research from the past 40 years to provide a snapshot of what has influenced safety. Additionally, catastrophic multiple-death fires and fires in the wildland/ urban interface (WUI) were looked at because they have the potential to cause significant human loss. (read more)